Trapezoidal O-ring shapes up to a more secure, leak-free performance.

The Trap-Seal, with its consistently positive retention in the groove, essentially eliminates the possibility of full or partial O-ring pop out which occasionally occurs with standard round-shaped O-rings.

During transit, storage or fitting assembly, the round-shaped O-ring sometimes pops out of the groove. The seal's trapezoidal shape leads to improved retention within Seal-Lok'sTM ORFS groove and virtually eliminates costly leakage and/or time consuming pre-assembly handling.
Plus, for seal replacement in the field a standard O-ring can be used since the groove design has not changed. But because Trap-Seal reduces the possibility of pop out, it also reduces the need to replace or reinstall the seal. Imagine, a seal that doesn't get pinched and fail prematurely. 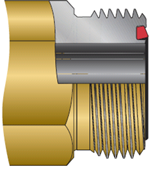